-FOCUSED ON RIGHTS OF UNDOCUMENTED TO EDUCATION, BUT INCLUDED NO MENTION OF POTENTIAL SECURITY ISSUES


Need to Share News requested files from the Montgomery Country Public Schools (MCPS) related to safety issues involving illegal immigrants in the system. The request, under state public access law, included documents related to the case of two undocumented male students (then 18- and 17-years-old) accused of raping a 14-year-old girl in a Rockville High School restroom. Prosecutors later dropped rape charges; the 17-year-old has since pleaded guilty to a child pornography charge (reportedly related to a picture taken by the girl) and the 18-year-old is scheduled for trial on a similar charge this fall.

[Remarkably, the lawyer for the younger teen now claims he may ultimately receive a green card; media reports had earlier indicated both men would be deported.]

We wanted to learn how MCPS evaluates security issues involving undocumented immigrant students (who in some cases may be older than other students; have committed a crime by entering the country illegally; or been exposed to criminal activity and trauma during their journey to this wealthy county outside Washington). Are such immigrants more likely to be linked to crime and/or gangs? If so, does their presence raise any greater or different safety issues than other student groups?

The county from which MCPS draw its students has experienced numerous killings by teenagers, including those affiliated with MS-13, known for illegal immigrant membership): “We got 16-year-old kids ordering murders in Montgomery County. We got 15 and 16-year-old kids committing murders in Montgomery County, so I think we need to be more proactive,” a local prosecutor told the media days ago.

However, MCPS withheld emails and documents we believe pertain to such issues. For example, we requested copies of "MCPS Form 230-37 'Gang-Related Incident Reporting Form,'" but were told: "Completed forms are protected from disclosure by the Family Educational Rights and Privacy Act (FERPA) and various other student privacy laws."

Documents that were released portray school leaders determined to follow legal -- and what they clearly consider ethical -- requirements to educate illegal immigrants, but not focused on security challenges those students might pose.

Weeks before the alleged rape in March, District Superintendent Dr. Jack Smith sent his school principals "Updated Guidance Regarding Immigration Enforcement" (see the memo below) that reminded staff of their legal requirement to educate all students, regardless of immigration status; provided instructions on how to deal with ICE agents appearing at school; and essentially told the employees to stay mum about illegals in the system (even noting the country policy department itself "plays no role in enforcing federal immigration law.")

Missing from the memo was any indication that illegal immigrants, including those in their late teens or older, could pose security problems for the system and other students.

The release included a number of documents, most already publicly-available, and a trove of emails from the public to Dr. Smith. The emails ranged from messages of support to thoughtful criticisms of MCPS statements, even pitches for business services related to school crime, but also included vicious and threatening emails. Many emailers appeared enraged by Smith's reported comments to the media that public response to the alleged crime was “racist” and “xenophobic.”
Other emails included the sort of questions we want answered (the message below includes a reference to Montgomery County's Executive Ike Leggett and the jurisdiction's reputation as a "sanctuary city.") 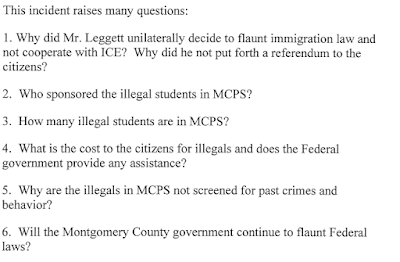 Unfortunately, MCPS appears to be withholding documents that may include such information, perhaps among 100+ emails denied to us.

"Additionally, we have withheld  122 emails  that are exempted from  disclosure under provisions
of the Maryland Public Information Act, including but not limited to: the personnel records exemption under GP § 4-311; the public security exemption under GP § 4-352; the investigatory records exemption under  4-3 51; the "privileged or confidential by law" exception under GP § 4-301, which encompasses the  attorney- client privilege, the common law deliberative process privilege, and the speech and  debate privilege, which applies to members of the Board of Education acting in a legislative capacity; as well as the intra- agency and inter-agency communication exception under GP § 4-344.  See Maryland Public Information Act Manual chapter 3. Disclosure of such emails would, in our view,  discourage full and frank deliberations by MCPS decision makers and other Montgomery County agencies, which is contrary to the public interest."

Here'd the memo on immigration enforcement sent by Dr. Smith in February of this year. 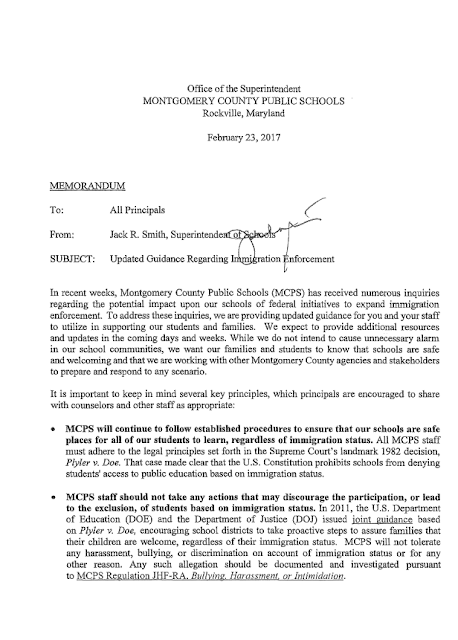 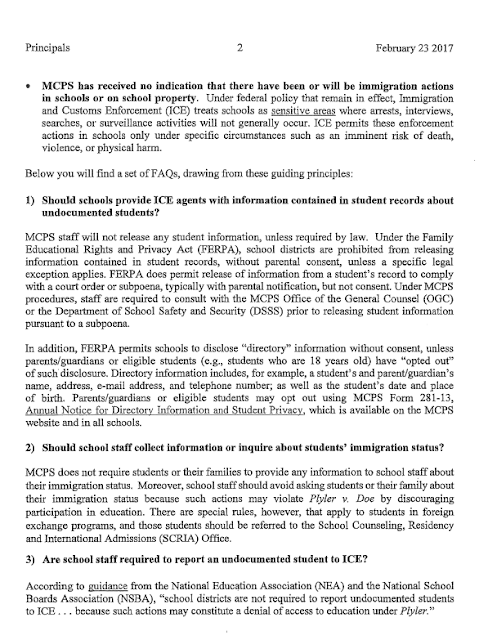 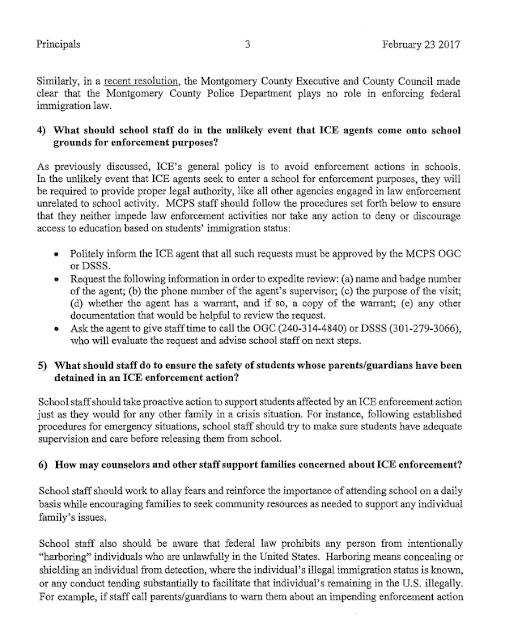 The following "Frequently Asked Questions," included in the released files right after the memo above, was clearly written after the March incident: 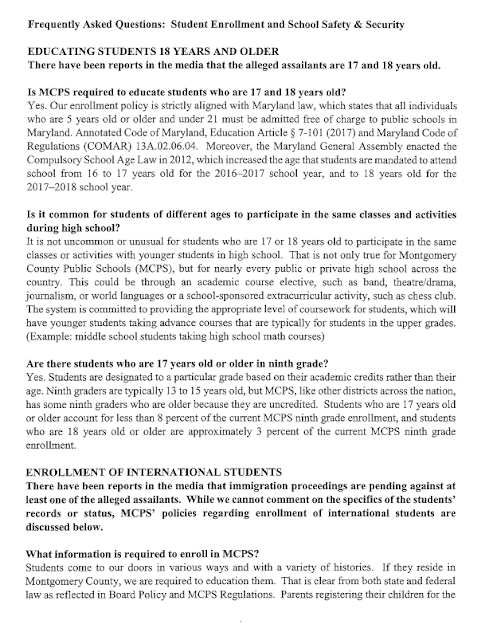 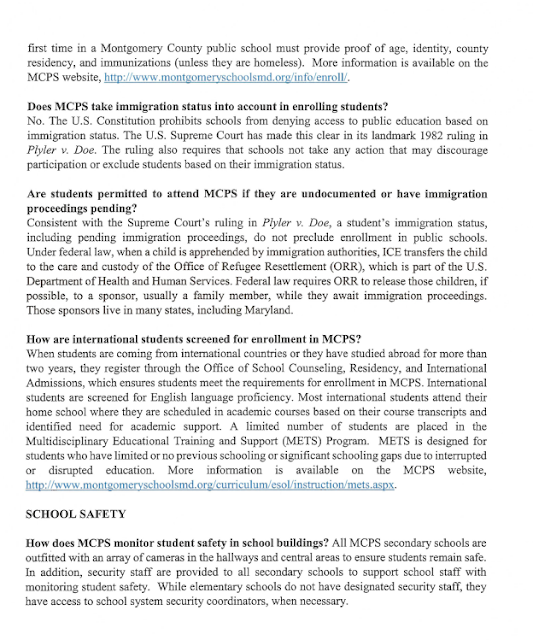 The released files included this summary of a security review ordered after the incident (It apparently resulted in a major security upgrade announced in June.) 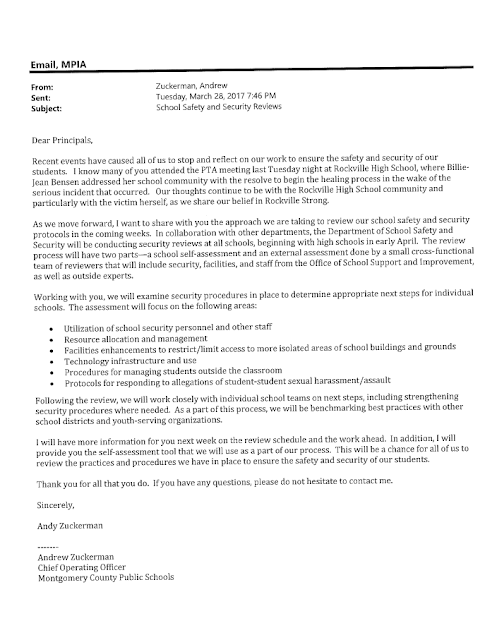 The announcement of the security review drew this response from an MCPS principal (name/school not included given the security flaw mentioned in the email):