How Many Applicants for US Citizenship Admit Being Terrorists or Communists? Or Refuse to Support the Constitution? The US Government Says It Doesn't Know

[Editor's note: Despite the repeated statements from USCIS seen below, we still find it hard to believe this data is not kept and analyzed somewhere in the government. Please contact us via the form on the right if you know what's really going on.]

US Citizenship and Immigration Services (USCIS) Form N-400 is the "Application for Naturalization," filled out by permanent US residents who want to become citizens. Their answers provide critical information for American officials tasked with "vetting" immigrants. In theory, this information is used to keep terrorists -- and those hostile to the US who might become terrorists or support terrorist groups and their ideologies -- from becoming naturalized US citizens (which far too many have done in the past.)

So what does data from the huge numbers of these forms filled out every year tell us? How can the government use this information to identify trends useful in combating terrorism and keeping dangerous people from becoming US citizens? Is "extreme vetting" required or is the system working well as is? The answer surprised even us.

As we reported last year, the Form still does NOT specifically ask applicants if they've been members of current enemy groups such as ISIS, al-Qaida, Hizbollah (or the Muslim Brotherhood). However, N-400 does specifically require that an aspiring American citizen reveal whether he's been a member of the Communist Party; WWII Nazi groups; or, generically, a "terrorist organization." It also asks questions about previous criminal activity. 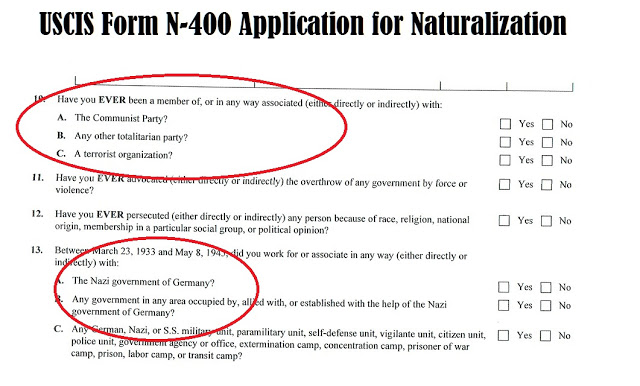 Ideological beliefs also come up in the form, including some questions President Trump and his team would no doubt like to keep and expand for "extreme vetting" of immigrants to exclude supporters of Islamist terrorism. Among these questions: "Do you support the Constitution and form of Government of the United States?" and "Are you willing to take the full Oath of Allegiance to the United States?"

So we wondered: How many applicants admit on Form N-400, for example, having been a member of a terrorist group and, if so, which ones? How many concede they were Nazis or Communists? [Before you say: "A terrorist or Islamist would lie anyway," read our original story to see why such questions are still extremely important for prosecutorial and intelligence reasons.]

To the President's call for stronger vetting: How many people who want to be US citizens say they do not support the Constitution?

The form also asks whether applicants have (illegally) voted in US elections, data that also pertains to some important policy issues (and, of course, the government finds room on the form to identify those suspicious dukes, earls or countesses applying for citizenship.)

Last year we asked the USCIS spokesman for statistical information on how the questions were answered. After some research, he said the statistics were not available in his office, but we could file a Freedom of Information Act (FOIA) request that would legally require USCIS to provide the information or explain why it would not.

But some eight months later, we received a response from the agency (see below) that neither provided the information nor said it would not be given to us. Instead, USCIS says it does not have the information at all.

"No records responsive" to our request were found, USCIS told us in writing.

No records tracking how many immigrants admit to having been terrorists, Communists or Nazis when filling out Form N-400 to become a naturalized US citizen? No numbers on how many check the box when asked if they were drunkards, bigamists, prostitutes -- or were involved in genocide?

We couldn't believe it. With Big Data analytics so important for identifying terrorists and their networks, and so much critical data being provided on the USCIS forms, we figured the government had to save and analyze N-400 data for trends. So we asked the FOIA office to go back and check. Maybe USCIS really had the data, but just didn't want us to see it, or thought it was too difficult to export, or wanted to keep it secret.


So we emailed a question to the FOIA officer at USCIS: "Thanks Ms. (X): I just want to be absolutely clear on your final answer to the question: Does USCIS keep track of applicant responses to those various questions on the forms?" Answer: "According to the POC at the program office I spoke to, we don’t keep track of that information in our system."

When we pressed further, word came down from USCIS higher ups: "We have reached out to the program office responsible for responding to this request and they have reiterated that records do not exist that would answer your FOIA request" (emphasis ours), wrote the Supervisor, (FOIA/PA) Significant Interest Group, National Records Center, United States Citizenship and Immigration Service.

Could the issue be a confused or unresponsive bureaucracy? We asked for confirmation from the department's public affairs office, which recently responded. "We fully stand by the information provided by the FOIA officer," confirmed the spokesman.

Bottom line: the US government agency in charge of immigration says it does not collect, compile and analyze some of the most potentially important data available on the terrorist and ideological threat posed by would-be immigrants to the United States. 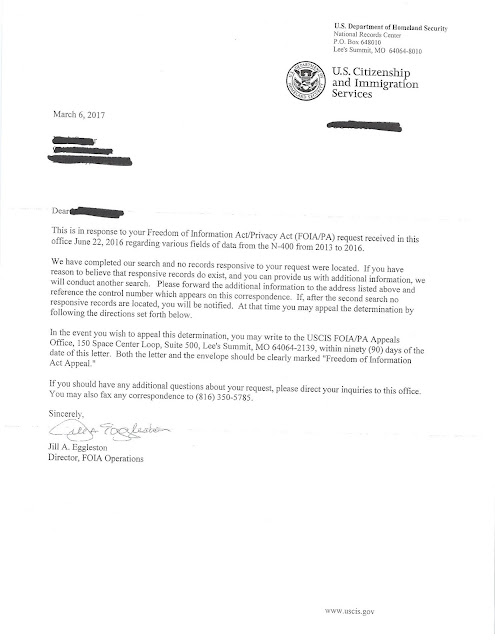 Background from our earlier report: US specifically asks immigrants if they were WWII Nazis or members of the Communist Party, but not if they were part of ISIS, al-Qaida or Hizbollah. See more here.


To be admitted legally to the United States, then apply for a Green Card and later become a naturalized citizen, an immigrant typically must fill out various forms managed by the State Department, US Customs and Border Protection (USCBP) and US Citizenship and Immigration Services (USCIS).


Given the debate over Islamist extremist terrorism and Islamic immigration (and "naming" the former as a threat), Need to Share News decided to review these questionnaires** and seek answers from the agencies about the process and statistics involving them. [Important note: This report concerns the major documents used by most immigrants. Special programs, such as refugee resettlement, often require additional paperwork/vetting.]


The only terrorists groups we've seen specifically mentioned in the major documents are Colombian terror groups -- even though they've never attacked the US homeland and are widely believed to have no interest in doing so.
at May 08, 2017