[Note: Critics of President Trump say the "vetting" of visa applicants and immigrants is already tough enough. You decide...]


To be admitted legally to the United States, then apply for a Green Card and later become a naturalized citizen, an immigrant typically must fill out various forms managed by the State Department, US Customs and Border Protection (USCBP) and US Citizenship and Immigration Services (USCIS).


Given the debate over Islamist extremist terrorism and Islamic immigration (and "naming" the former as a threat), Need to Share News decided to review these questionnaires** and seek answers from the agencies about the process and statistics involving them. [Important note: This report concerns the major documents used by most immigrants. Special programs, such as refugee resettlement, often require additional paperwork/vetting.]


The only terrorists groups we've seen specifically mentioned in the major documents are Colombian terror groups -- even though they've never attacked the US homeland and are widely believed to have no interest in doing so.


"Won't they just lie?" ask critics of enhanced immigration screening. Many will, but that misses a key point: Getting them on the record can allow the US to deport, "denaturalize" or prosecute them later if the lie is discovered. This is one reason the US has long asked about membership in Nazi groups: "The U.S. Department of Justice has used lies about wartime service made in immigration papers to deport dozens of suspected Nazi war criminals," the AP reported in 2013. This tactic has also been used against accused members of Islamist terrorist groups and others.


[Note; Do applicants always lie, or do they ever tell the truth about being in terrorist or subversive groups? We asked the government how many immigrants admitted while answering the forms that they were Communists or Nazis, or belonged to a terrorist group. We were surprised by what USCIS told us: "Applicants report membership in various types of groups or organizations, including terrorist organizations, but we do not have statistical information about which applicants claimed membership in which groups readily available." The agency told us such information might be available via the Freedom of Information Act (FOIA).]


Since the FBI is already overwhelmed with "lone wolf" (or often more accurately, "known wolf") cases across the country, and can often take no action until a terrorist act is committed, an enhanced ability to deport Green Card holders and citizens who've lied about their backgrounds could be a powerful tool. 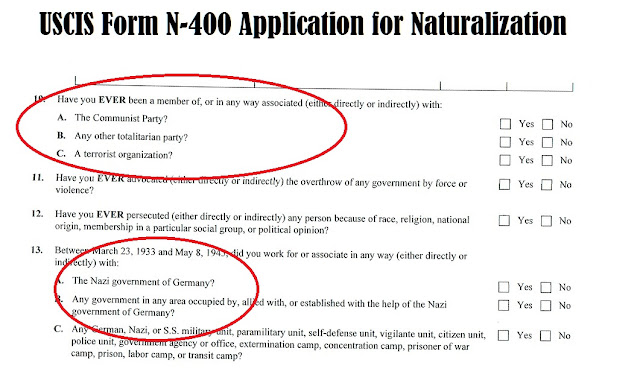 To be fair, during processing for a Green Card and then citizenship, the government does ask in general about an applicant's membership in a "terrorist organization." "Under the Immigration and Nationality Act (INA), for lawful permanent resident status application purposes, an individual who is or has been a member of (or affiliated with) a terrorist organization is generally inadmissible to the United States....," a USCIS spokesman informed us via email. [Note re sourcing: All quotes are on-the-record and from a specific USCIS public affairs official, who asked that he be identified as a "USCIS spokesman."]


We also wondered about the issues raised by Donald Trump's camp and others: How about people who've belonged to Islamist organizations (eg, groups that believe Islamic law should be supreme). In others words, does the US government try to screen out applicants who believe in "Sharia law" above the Constitution? These people are often called "Sharia supremacists" -- although many American Muslims dispute such terms -- more in a later report.

The government agencies also all let us know their questions are mandated by the INA and applicable law -- in other words, if they don't specifically ask about membership in ISIS or al-Qaida, Congress needs to take action.


Finally, we asked USCIS for the list of "terrorist groups" its citizenship officials use to screen immigrants, plus whether the controversial Muslim Brotherhood is on that list. That information too was not readily available, though the spokesman said he would try to get it for us. [See update on Aug. 18, 2006, below -- answers from USCIS.]***


The government did say not any information would likely be available on the number of immigrant applicants who answer "No" when asked if they support the Constitution (and/or say they will not take the Oath of Allegiance.) "USCIS does not statistically track this specific information," said the spokesperson.


We'll have more on this topic, including the issue of an ideological test for immigrants to screen out those who believe in "Sharia law." That's clearly far more complicated and contentious than a potential simple improvement to the current immigration system: Specifically asking applicants in writing whether they belong/ed to ISIS, al-Qaida and other groups that want to destroy the United States today.


What questions do you think the US government should ask immigrants? Let us know in the comments section below.

*Some of the applicable documents:

Is there a list of “terrorist organizations” provided to examiners? For example, are the organizations on the State Department list of terrorist groups also on your list?


Is the Muslim Brotherhood on the list/s above?


*PS We tweeted this link to reporters covering the "vetting"story @ major media organizations such as the NY Times, Washington Post and CNN. None has responded or, as far as we can tell, included any of this information in their reporting as of 8/18 afternoon.