A longtime aide to Bill Clinton obtained a $50,000 political donation in return for a 1992 letter from then-Presidential candidate Clinton to an Asian politician, according to FBI files obtained by Need to Share News. Ironically, Clinton's signature was actually simulated by the aide, Maria Haley, who would later be given positions at the Clinton White House and US Export-Important Bank -- and appear in the "Chinagate" campaign finance scandal.

Haley (Maria Luisa Mabilangan Haley) died in 2011. The information below comes from her FBI file. 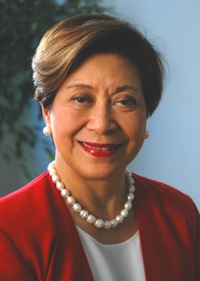 
Haley also apparently had a relationship with Hillary Clinton. In recent days an email was released showing Hillary Clinton and top aid Cheryl Mills were contacted by Haley before her death. The contents of that email were "censored" by the State Department, according to Judicial Watch. Haley also received a positive FBI reference from Bruce Lindsey, now chairman of the Clinton Foundation and former Clinton Administration official.

According to an unnamed source in the files, a businessman requested that then-Governor and presidential candidate Bill Clinton write a "good guy letter" to South Korean presidential candidate (and later president) Kim Young-sam, wishing the Korean well. The requestor believed the letter would help him or her get a credit line at the Korean export bank. Haley "drafted, typed and signed" the letter, from "Bill Clinton," on Clinton/Gore 1992 campaign letterhead, the source said.


According to the FBI's source, Haley was allowed to sign Clinton's name and may not have received specific permission from Clinton or his top campaign officials to sign and send this particular letter. The effort was part of fundraising operations by an organization called APAC-Vote, linked to the Asian Pacific Advisory Council (APAC), which raised money for Clinton and Democratic organizations. APAC-Vote was later associated with other scandals. 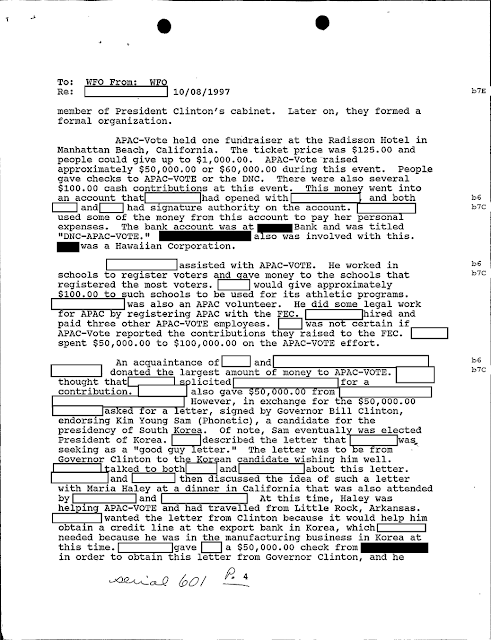 The FBI file also links the person who requested the letter to a multi-million-dollar effort to launder money from a Japanese corporation. We redacted the names of three companies and one bank mentioned in the files (our redactions are in black; the white redactions are from the FBI). We were not able to verify the allegations against these companies or reach them for comment, so for the time being we have chosen not to name them. 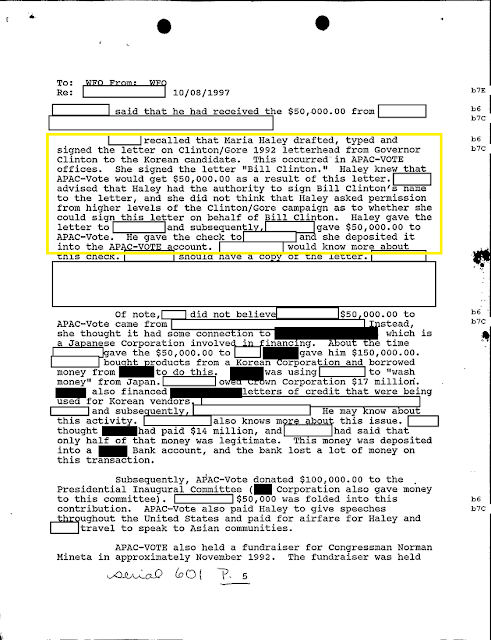 Haley's name surfaced in the "Chinagate" scandal of the 1990s, which involved allegations the People's Republic of China had tried to buy influence through donations to the 1992 Clinton presidential run and subsequent Democratic campaigns. The scandal grew to include other claims of campaign finance improprieties involving the Clinton political machine and Democratic Party. See more here. Haley was also accused of trying to push through a questionable loan after being appointed by Clinton to the Board of the US Export-Import Bank -- see
"Appointee of Clinton Pushed Deal Sought by a Big Donor" (New York Times, 1997).

According to her New York Times obituary: "Ms. Haley worked for Mr. Clinton when he was governor of Arkansas and when he was president — originally in the presidential personnel office and then, from 1994 to 1999, on the board of the Export-Import Bank of the United States...


Ms. Haley came under scrutiny during her years at the Export-Import Bank because of her friendship with James T. Riady and John Huang, key figures in an investigation of foreign campaign contributions in 1996. More than $1 million in Democratic National Committee contributions raised by Mr. Huang was returned because of questions about their origin.

Ms. Haley met Mr. Huang met in the 1980s, when she was at the Arkansas development agency and he worked for the Worthen Banking Corporation, which at the time was partly controlled by the Riady family of Indonesia.

Ms. Haley said she was not influenced by her friendships with Mr. Huang and Mr. Riady. She was not charged." Read the 2011 obit of Ms. Haley.

Haley received mostly glowing references during her FBI background checks from those asked about her suitability for a US government position of "trust and responsibility."

The positive references included one from her White House boss Bruce Lindsey, who is now chairman of the Clinton Foundation, and White House official Nancy Hernreich Bowen, who according to the FBI file roomed briefly with Haley in the 1990s. Bowen now uses her "relationships to assist Asian and American businesses with their cross border business interests" at the same consulting firm that once employed Bill Clinton and Hillary Clinton's top aid Huma Abedin, Ms. Abedin was paid by this firm while also working for Hillary at the State Department, according to media reports.

However, not all Haley's references were positive. One source, who requested the FBI protect his/her identity, hints at the Chinagate issue, calling Haley a "fearless politician who would do anything for the Clinton/Gore administration, even if it was illegal," the file states. The source added that Haley "controlled" Asian campaign contributions to the Clinton/Gore administration. However, this source reportedly did not have first-hand information to back up the claims.

Remarkably, the FBI file -- or at least its released portions -- are silent regarding Haley's connections with other Chinagate figures, such as those revealed in the media reports above. If Haley's involvement with shady fundraising went deeper than publicly alleged and discussed in the FBI file, she apparently took those secrets to the grave. 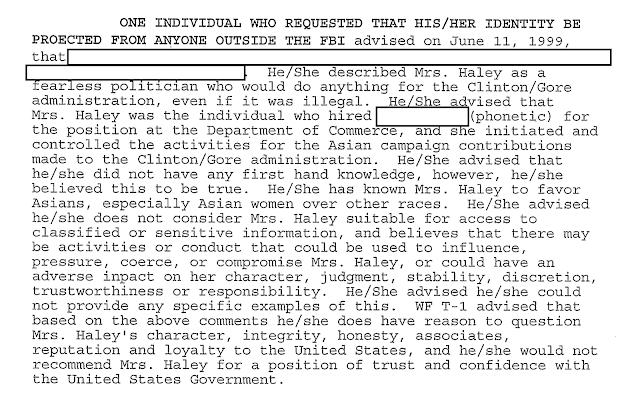