Secretary of State Clinton joked about a failed North Korean missile test after a senior aide facetiously suggested they send North Korea's dictator a signed picture from the movie "Failure to Launch."

The State Department team may have needed a laugh at the time, since the launch attempt days earlier in April 2012 had generated widespread criticism of the Obama Administration's policy toward North Korea.


"The launching has been politically problematic for the Obama administration, which only weeks ago completed an agreement with the North to provide food aid in return for Pyongyang’s agreement to suspend uranium enrichment and refrain from test launchings of long-range missiles," reported the New York Times. "..Mitt Romney, the presumptive Republican presidential nominee, said the launching illustrated President Obama’s strategy of appeasement. 'This incompetence from the Obama administration has emboldened the North Korean regime and undermined the security of the United States and its allies'"(see article here.)

"Let's get Sarah Jessica Parker and Matthew McConaughey to sign the attached and send it to (North Korean leader) Kim Jong Un," suggested State Department spin doctor Philippe Reines in his April 16, 2012 email. "His (Kim's) father was supposedly a huge movie buff. And the kid always looks like he could use a laugh" (see the email below).

Clinton responded that the movie, a 2006 romantic comedy, was playing on her TV at that very moment, writing: "auspicious sign?"

When Reines remarked on the coincidental timing, Clinton responded: "It's those strange signals you keep receiving from your dental fillings." 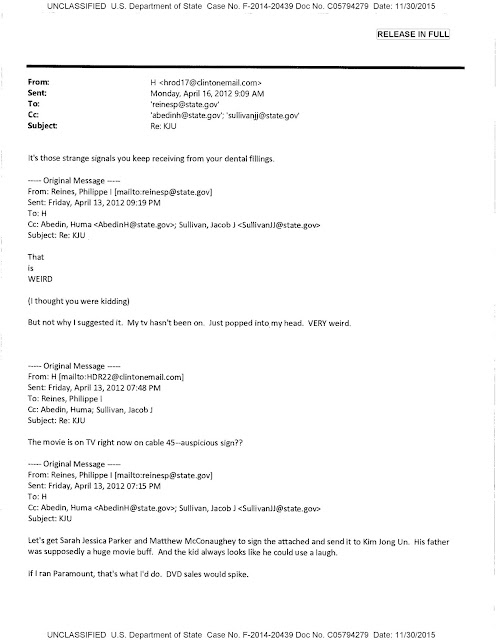 [The exact "Failure to Launch" picture sent by Reines to Clinton was not released. The image below is one of several available on the Internet.] 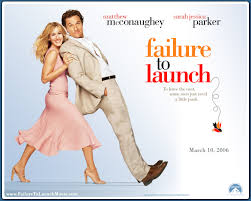 However, the joke turned out to be on the United States. Starting just months later in 2012, North Korea went on to successful tests of its long-range missiles, most recently earlier this year, when it also detonated an underground nuclear weapon,

U.S. military and intelligence officials now admit Pyongyang has made substantial progress during the Obama Administration in developing nuclear missiles that could one day hit the continental U.S. While public estimates of North Korean progress vary, in April 2015 the U.S. military commander in South Korea testified to the Senate that he believed the North could already mount a nuclear weapon on a missile capable of reaching the American mainland (see story here.)

This year's successful tests and the defiant progress they show have prompted unprecedented responses from North Korea's alarmed neighbors in South Korea and Japan, and President Obama recently signed into law enhanced sanctions against Pyongyang.

The emails also raise questions about how informed Sec. Clinton was on North Korean issues. In a 2011 exchange below, Clinton appears caught off guard by international media reports that U.S. and North Korean negotiators had reached an agreement for Pyongyang to suspend its uranium enrichment in return for American food aid (the agreement that was later concluded but failed to prevent the North from conducting that 2012 missile test).

Their responses are classified. 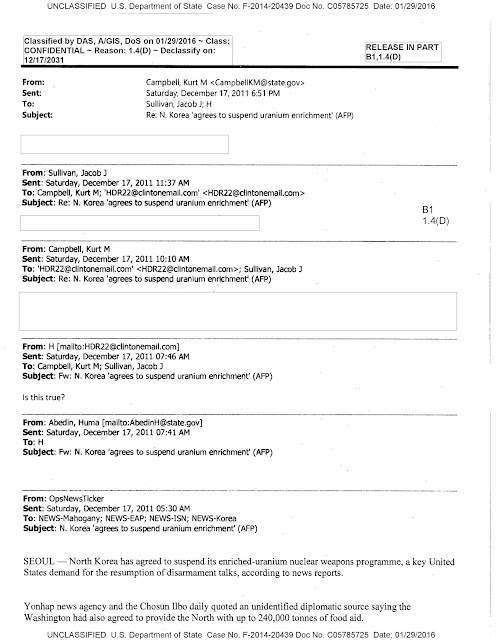