How Ronald Reagan Took On an Anti-Semite and the Communists: Declassified FBI Files

The voluminous files (most about threats against Reagan) were posted a couple months back and can be found here (and appear to include some files provided in the past as well).

Reagan played a key role in preventing the Communist Party from subverting the influential Screen Actors Guild in his first stint as the union's president from 1947-52 (he returned to the position years later to help negotiate a ground-breaking agreement that provided health and pension rights for actors, along with residual payments for their performances. In contrast with presidents since, prior to his election Reagan had actual hands-on accomplishments improving the position of union members.)

Reagan's fight for the soul of his union was not some witch-hunt against left-wing dissent or attempt to "blacklist" innocent liberals. He publicly defended the right of people to hold communist beliefs, but drew the line against secret efforts to undermine democracy itself, the goal of many members of the American Communist Party and its task-masters in Moscow. Downplayed, whitewashed and mischaracterized for decades by the media and mendacious, often compromised entertainment figures, the communist effort to gain control of Hollywood, and the plan's overseas links, were indeed wide and insidious. This has been increasingly documented by historical work in recent years that parallels revelations from declassified US and Soviet files about the range of American government officials working for the Soviets during the Cold War. For a new look at this effort in Hollywood, see: Hollywood Traitors: Blacklisted Screenwriters – Agents of Stalin, Allies of Hitler  [Find related work on communist agents in the government here and real life "Manchurian Candidates" here.] 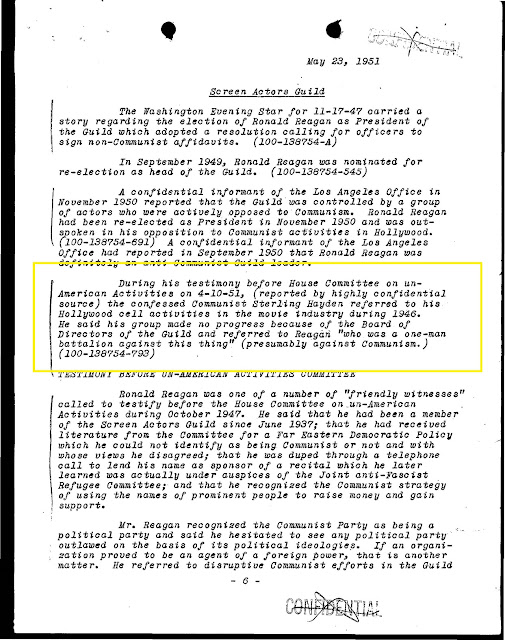 Reagan's effectiveness in thwarting these plans was highlighted by none-other than well-known actor and one-time communist Sterling Hayden, known to modern filmgoers for his role as the corrupt police captain in "The Godfather." (To be fair, despite his involvement with communism and numerous personal problems, Hayden was a WWII combat hero, in contrast to Reagan, who had weak eyesight and spent the war as an officer in public relations and movie production. For more on Hayden's remarkable life, see here.)

Hayden, as seen in the document above, revealed Reagan was responsible for blocking the efforts of his communist cell and was a "one-man battalion" against the communist movement in Hollywood.

Of course, the Soviets were also known for their anti-semitism (and their agents in Hollywood -- as documented in the book above -- literally followed the "party line" to discourage opposition to the Hitler regime during its alliance with Moscow.)

Ronald Reagan apparently was having none of that either. The declassified document below quotes a report from the FBI's LA office that "Ronald Reagan almost came to blows with a man who made anti-Semitic remarks" during a 1943 cocktail party in Beverly Hills.

[The document below also mentions a radio broadcast by Reagan against the Ku Klux Klan.] 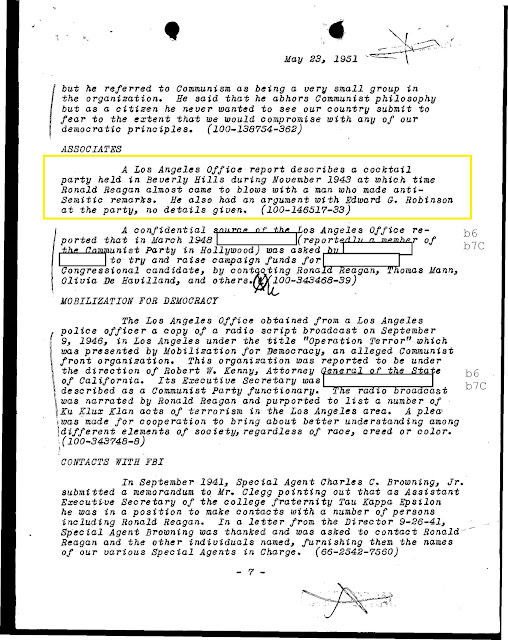 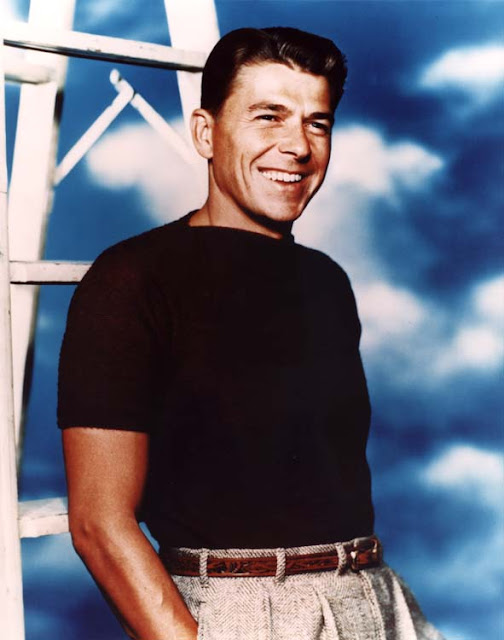