In the tangle of ethnic and religious bloodletting across Iraq and Syria, one group stands out for its fighting spirit and friendliness to America: the Kurds. Many in Congress have urged the Obama Administration to do more to assist this ethnic minority and the region they control in Northern Iraq, and U.S. Special Forces are now training and supporting them.

Ironically, few Americans (but probably many more Kurds) are aware that U.S. Special Forces were once dispatched on a secret mission to crush the Kurds during a Cold War insurgency. 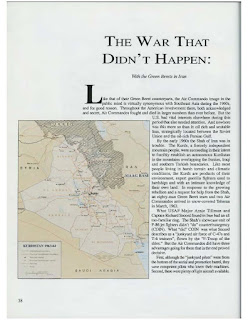 The 1963-4 mission to help subdue a Kurdish insurgency in Iran was "the one and only clear-cut, unambiguous victory I would be associated with in my career," later wrote a veteran of numerous American special operations during the Cold War, Air Force Maj. Gen Richard Secord. He adds in his book Honored and Betrayed (see below): "Perhaps it was the last such victory America would enjoy until the 'great' Panama raid of 1990..."

Secord writes respectfully of the Kurd's warrior spirit and desire for independence, long frustrated by the sprawl of their ancestral lands across the modern borders of Iraq, Iran and Turkey. After World War II, the Kurds sought Soviet sponsorship for their fight to establish an independent Kurdistan, starting with territory in Iran, which put them on the wrong side of America and its then-ally, the Iranian government. Under the leadership of their so-called "Great General" Ben Bella Mustafa Barzani, the Kurds obtained safe haven in Iraq and began an insurgency across the border in Iran.

"By 1962, the Iranian police...had lost control in many of the rural and mountainous areas," wrote Secord (later known for his involvement in the Iran-Contra affair). Soon Iran's leader, the Shah, a major recipient of US military aid during the Cold War, asked for help.

Secord, another Air Force officer and 80 U.S. Army Special Forces troops arrived to help the large Iranian military defeat the Kurds. First the Americans helped develop a plan to seal the border between Iraq and Iran, reducing the movement of guerillas into the battle space, then moved to improve Iranian counterinsurgency units and their leaders, said to rely more on beating their troops than training and inspiring them.

Iranians tutored in counter-insurgency tactics were sent into the mountains for the classic combination of civic action to win support from locals and combat operations to root out the guerillas.

"Our advisors went into the field with Iranians in the role of stiffeners," recalled Secord. He and the other Air Force advisor rigged Iranian trainer planes with rockets and machine guns to provide close air support, plus outfitted a transport plane with a load speaker for psychological operations.

"By spring 1964, the war was essentially over...the hard-core Kurdish troops withdrew permanently to the Iraqi side," Secord recounted.

Before long, the sides had flipped as Kurds re-targeted their guerilla war against the Iraqi government, with covert assistance from Iran and the U.S during the 1970s. This too ended badly for the Kurds when Iran suddenly shut off their aid and sanctuary, leaving many to the mercy of Saddam Hussein (and convinced they'd been double-crossed by Washington.)

When the U.S. invaded Iraq in 2003, the Kurds fought alongside American Special Forces, ultimately carving out their own jurisdiction. More recently, the Kurdish "Peshmerga" military force in Iraq has proven the most effective Iraqi unit in the fight against ISIS (the Islamic State of Iraq and Syria).

U.S. Special Forces units are now training the Peshmerga while a related group of Kurds across the border in Syria, the YPG, are helping direct American air strikes against ISIS. Yet a third Kurdish group is present in the area -- the PKK is a communist force that has long fought the Turkish government over Kurdish areas in Turkey. Considered a terrorist organization by both Turkey and the United States, the PKK controls bases in Northern Iraq.

These relationships grew even more tangled this month, as Turkey bombed PKK positions in Iraq, upsetting the American military. “We had U.S. Special Forces not far from where the Turks were bombing, training Kurdish Peshmerga fighters," a U.S. source told Fox News. There are also reports of the Turks firing on YPG forces, despite their help to the US fight against ISIS in Syria.

It's been over fifty years since U.S. Special Forces helped build what Secord called the "sinews of war" -- combat infrastructure such as communications, intelligence, training and logistics -- to help the Iranians beat the Kurds.

Now they're doing the same thing for the Kurds to help them beat ISIS.

Given that Iran's regime is now an enemy of the Kurds and Americans alike, it's certainly not out of the question that the Kurds might use their new "sinews" to help American special operators gather intelligence against Iran, where many Kurds still live.

And who is the president of today's Iraqi Kurdistan, which works so closely with the U.S. military? Massoud Barzani, son of the very "Great General" whose Kurdish guerilla army was beaten with the help of U.S. Special Forces advisors in the 1960s.