Why is the Air Force Still Classifying Information on the Hunt for Hitler & 60-Year-Old Research Projects?

We like a spy story about a glamorous Nazi test pilot as much as the next guy, so we were excited when we saw what was inside a recent delivery of documents we'd asked the Air Force to declassify.

But what jumped out was the fact the Air Force is still keeping part of the story secret after almost 70 years.

President Obama promised in 2009 "...my Administration is committed to operating with an unprecedented level of openness. While the Government must be able to prevent the public disclosure of information where such disclosure would compromise the privacy of American citizens, national security, or other legitimate interests, a democratic government accountable to the people must be as transparent as possible and must not withhold information for self-serving reasons or simply to avoid embarrassment."

Yet historical information decades older than the President is still being kept classified. That's frustrating for historians but heartbreaking for others, especially the families of Korean War POW/MIAs who are still not allowed to see 60-year-old record files -- from various military and civilian agencies -- believed to have answers on the fates of their loved ones.

Here's an example of a 1955 military document -- from a collection that has revealed important POW/MIA information -- that is still being kept secret at the National Archives. There are many more. 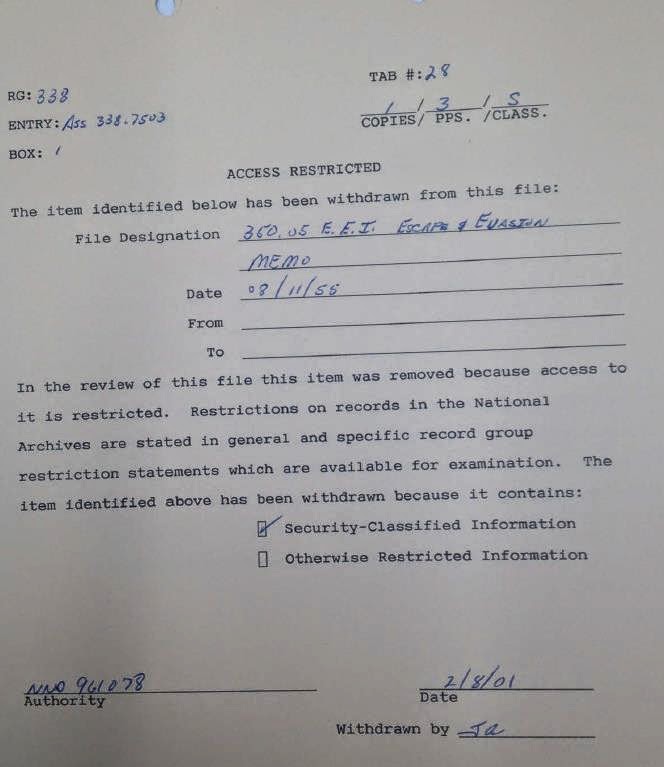 Anyway, back to the story of the Nazi test pilot, Hanna Reich (or Reitsch). You can see her below giving a Nazi salute (German Federal Archive via Wikimedia). She's said to be the only woman to get a WWII Iron Cross, as well as a volunteer for a German "kamikaze" unit that never got off the ground (bureaucratically and literally). 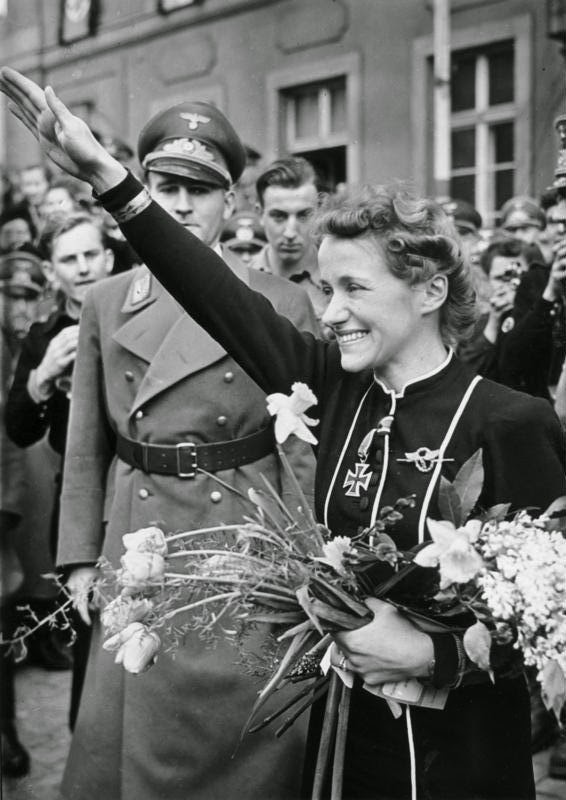 Her story is told in a 1977 interview of a former Air Force human intelligence officer named Col. Robert Work, who provided an oral history of his Cold War adventures. That report was turned into a 1999 Air Force history report, classified Secret. We asked for it to be declassified in August 2012 and it arrived last week -- it took almost two years for the military to process a 15-year-old document based on a 37-year-old interview concerning events dating back 69 years.

Soon after the end of WWII, Work got a message from his superiors concerning Reich."She's known to have flown out of Berlin in the last days of the war, and carried a male passenger who might have been Hitler," said the message. "It occurred to me that we could be sitting on one of the greatest stories of the war. Had Hitler flown out of Berlin, had Hanna Reich piloted him, and was he somewhere in Austria? The message had indicated though that 'we doubt Hitler is still alive.'" But...

So what comes immediately after that build up? The Air Force has decided to keep it secret. 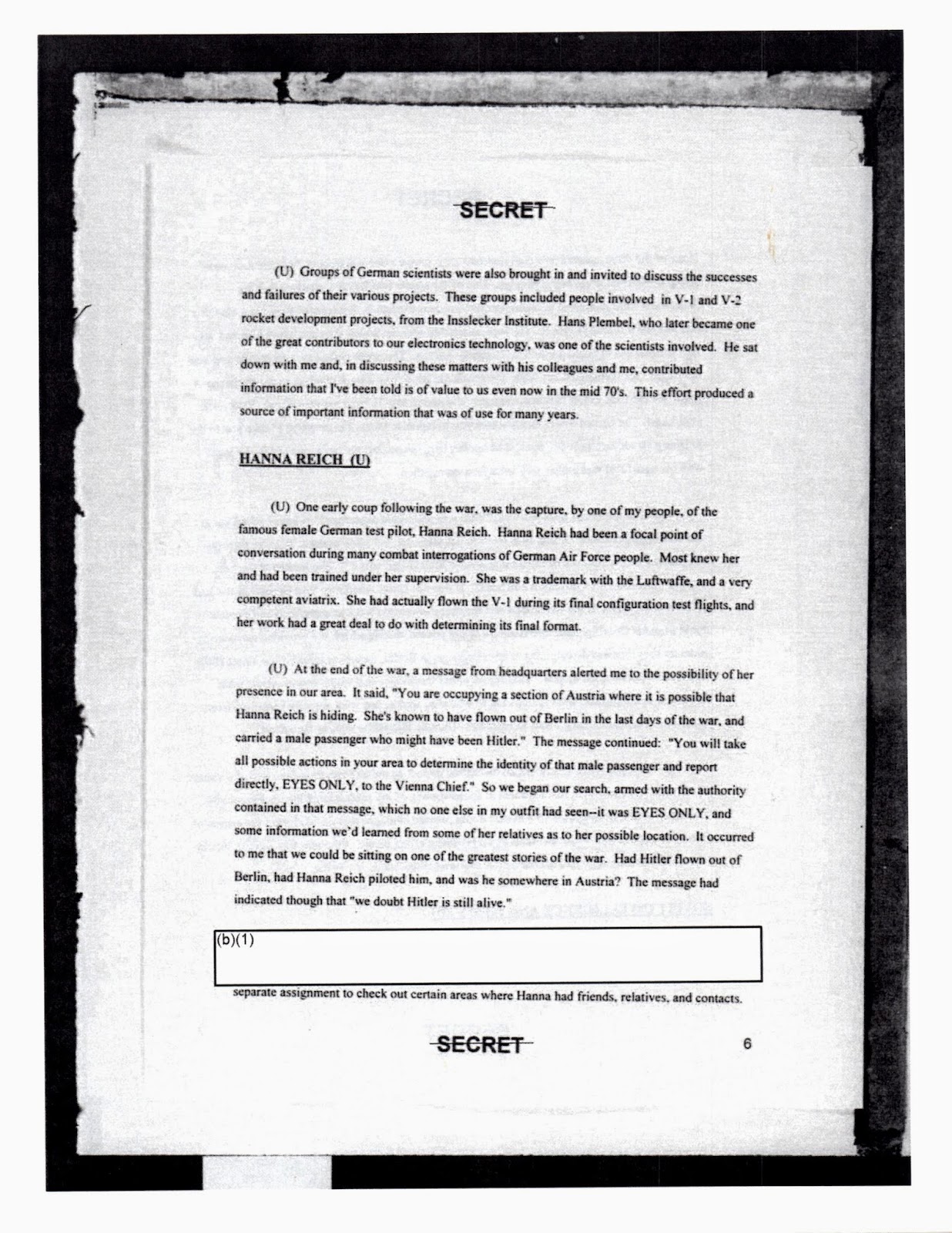 The released part of the document goes on to reveal that a US agent found Reich on a departing train and convinced her to toss down her bags and jump off.

During her interrogation Reich sounded disappointed the man she had flown out of Berlin was not the Fuehrer, "Oh! If only it had been." She reported he was actually the new Chief of the Luftwaffe. However, her information provided crucial details on the final hours in Hitler's bunker and helped persuade US intelligence that Hitler, whose body had not been found, was really dead (decades later it was revealed the Soviets had disposed of his remains).

During his 1977 interview, Col. Work went on to describe another of his most important projects, a program called WRINGER to get information from people escaping the Soviet Union during the late-1940s into the 1950s.

These reports -- there were about a million of them by the end -- were an important part of Air Force intelligence, including nuclear targeting, in the days before satellites could collect information from the Soviet Union.

"In fact, WRINGER reports were piling up on the floors of the fifth floor corridors in the Pentagon, almost endangering traffic in those corridors."

But what comes next is also censored as still being classified. 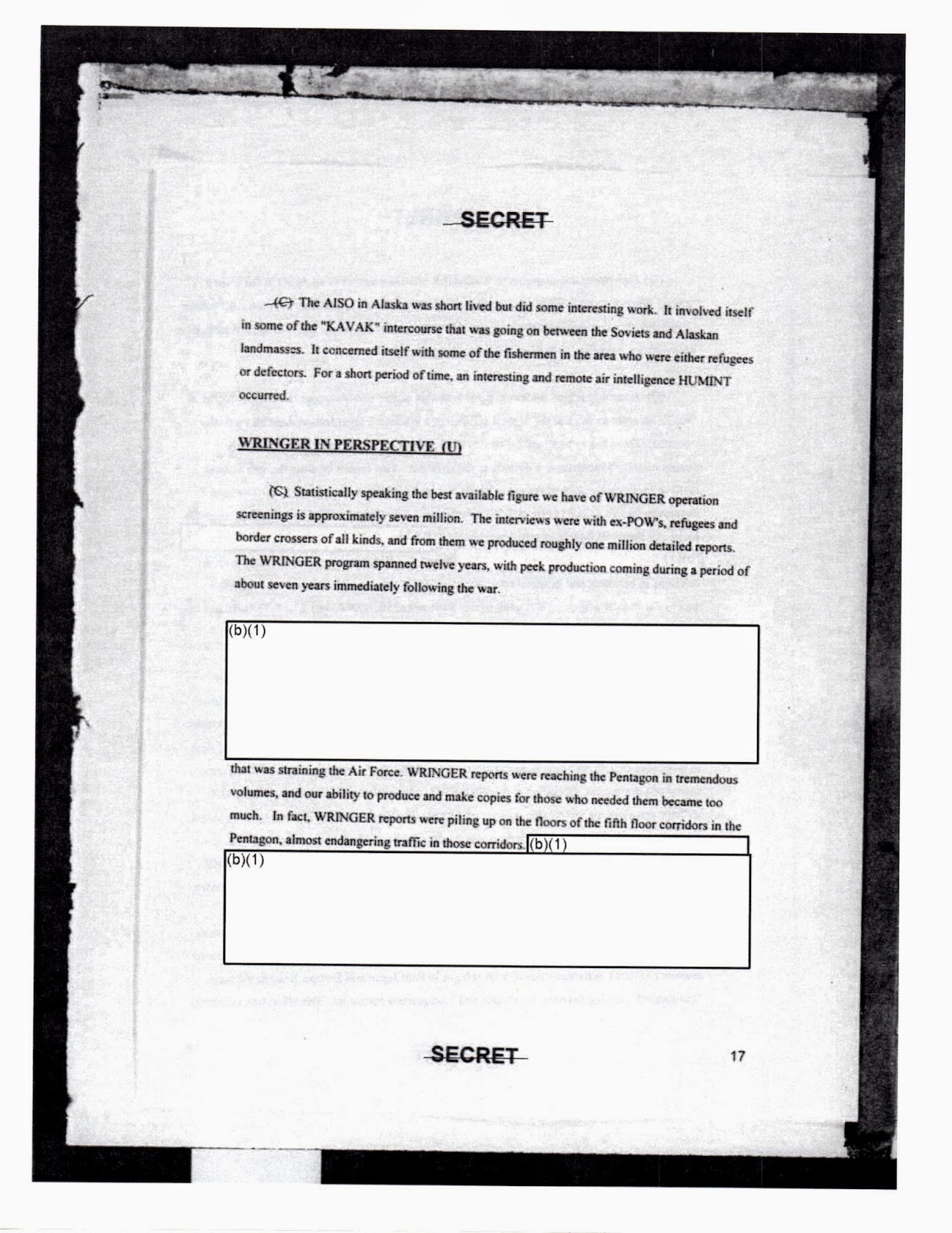 "(F)ortunately we in the Air Force learned some lessons and began working more effectively," the Colonel later notes. So what were those lessons? They may be in the next part of the document, which as you probably guessed is censored due to classification.

Finally, Col. Work gets around to discussing one "clandestine operation which ran for years" and provided special contributions. What was it? You're right, it's still classified.

To be sure, the Air Force gave us 60 days to appeal the withholding of this information. Experience tells us we might even hear back in a couple years. As for the relatives of the Korean War POW/MIAs, many of those in the know assume they will be dead before all the records they seek are declassified.